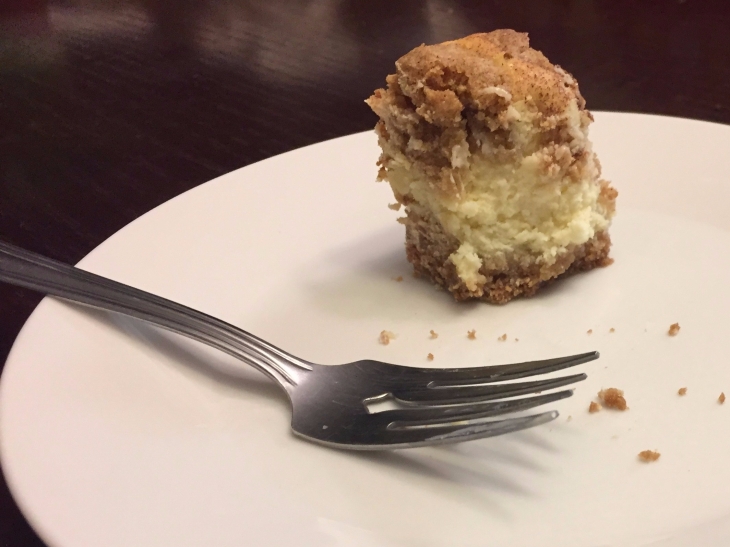 It’s pretty hard to stop oneself from eating these, so the above photo of a mostly-eaten one is the best I could do.

That’s right, today I’m sharing another recipe, this time white chocolate snickerdoodle cheesecake bars. This is a recipe that I tried for the first time just this past week as an entry for the baking contest. I was also the one who organized the contest, so I wasn’t eligible to win, but I think these would have been strong contenders. I warn you that they are very addictive.

*The cream cheese and butter should be removed from the fridge ~30 minutes in advance to allow them to soften.

Preheat the oven to 350 degrees and grease a deep 9” by 13” pan, preferably with cooking spray.

Begin by preparing the cheesecake layer. In a large bowl, beat the cream cheese and sugar until fluffy. Add eggs, vanilla, and salt and beat until combined. Set aside.

Next, prepare the snickerdoodle layer. Beat the butter and sugars together until fluffy. Add the eggs and mix thoroughly. Dissolve the baking soda in hot water and add along with the vanilla. Add the salt and cinnamon and beat together. Add the flour and pudding mix and mix by hand briefly before beating until completely combined. Stir in the white chocolate chips.

Take approximately half of the snickerdoodle dough and press it evenly into the pan, then sprinkle with cinnamon sugar. Pour the cheesecake batter overtop and spread evenly with a rubber spatula. Break the remaining snickerdoodle dough into small chunks and sprinkle them over the cheesecake as evenly as possible, then top with more cinnamon sugar.

Refrigerate in a sealed container for 4-5 days.

I'm 24 and currently pursuing a PhD in English at the University of Toronto. View all posts by Mitchell

Scribblescratch may feature posts containing profanity or dealing with mature or explicit themes. Please use your discretion while reading, and contact me if you have questions or concerns.