(The following is an adapted version of a lecture that I delivered at Mount Allison on April 10th, 2017. As the 2016-2017 recipient of the Bryce McKiel Scholarship, I had the opportunity to formulate, research, and present a lecture on a topic of my choice within the domain of English literature. The end result was the outline of a literary theory of my own creation, which I call ludicism. The first half of the lecture is below; the second half will be posted next Sunday.)

Before I delve into what exactly I intend to propose with ludicism, I’d like to provide some background on the origins of the theory. I’m very interested in the act and process of storytelling, and particularly how stories are told across different forms of media. There are currently more forms of media than ever before, but to me, one of the most interesting and exciting forms for telling stories is video games. About two years ago, I was playing a game called The Stanley Parable, which really demonstrates some of the unique ways that games can tell stories.

You can choose whichever door you want. If you go through the door on the left, the story continues in line with the narrator’s expectations and intentions. If you go through the door on your right, the story changes. There are dozens more choices you can make at various points, each of which can decide the direction and outcome of the story. Your choices, your interactions with the game, do not merely tell the story – the interaction is the story.

The pivotal moment that would eventually lead to this theory came a little later, when I was reading Mark Z. Danielewski’s House of Leaves. As anyone who has read the book can tell you, House of Leaves really loves playing with the way words are laid out on the page, but this isn’t just done for its own sake. 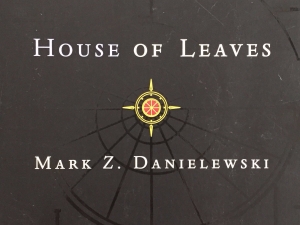 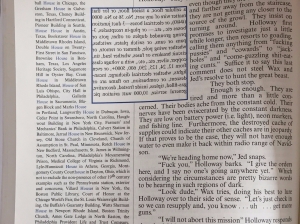 About a third of the way through the novel, there’s a period where the amount of text per page is drastically reduced, but this layout choice directly amplifies the impact of the content of those pages. 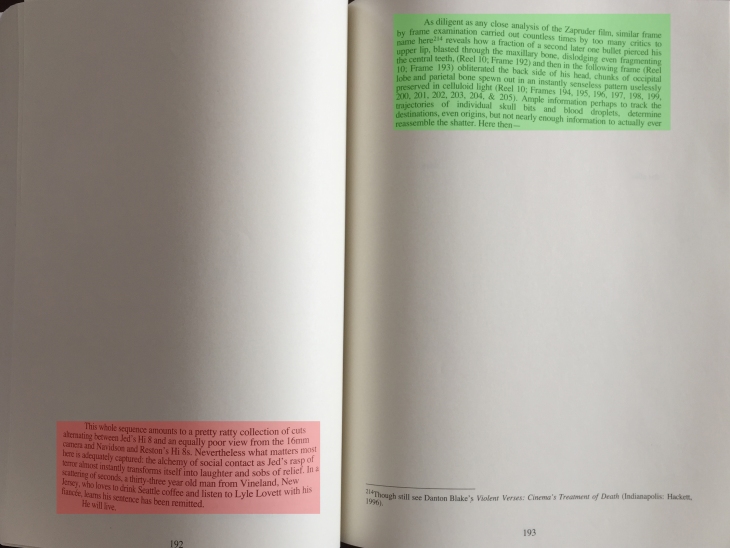 The main characters have just discovered another character, Jed, who had previously gotten lost and resigned himself to death. At the bottom of a page containing only one paragraph, highlighted in red above for clarity, the book says the following:

Nevertheless what matters most here is adequately captured: the alchemy of social contact as Jed’s rasp of terror almost instantly transforms itself into laughter and sobs of relief. In a scattering of seconds, a thirty-three year old man from Vineland, New Jersey, who loves to drink Seattle coffee and listen to Lyle Lovett with his fiancée, learns his sentence has been remitted.

At the top of the very next page, highlighted in green in the photo above, Jed is unexpectedly shot and killed, and the path of the bullet through his head is described with clinical detail and detachment. It’s an incredibly jarring sequence, and deliberately so, but what’s most crucial is what follows.

The amount of text per page is reduced even more starkly, to the point that the book takes twelve pages to share thirty-two words. This creates a very clear awareness of pacing that couldn’t be achieved if all of those thirty-two words were placed on one single page. It creates the feeling of time slowing down, but there’s more to it as well.

When I was reading the book, this part made me hyper-aware of the act of turning a page, simply by virtue of making me do so repeatedly in such a short time span. This provoked a measure of anxiety — I didn’t know what was going to happen on the next page, or the next, and so on — but also a sense of guilt, of responsibility. I was the one turning the page, pushing the story forward. In a way, I was the one that caused Jed’s death.

In thinking about this further, it occurred to me that interaction could be just as important for literature as it was for video games, and this became the foundation of the new theory that I call ludicism.

The name comes from the Latin word “ludus,” meaning “game” or “play.” Accordingly, the main theoretical conceit underlying this theory is a conceptualization of literature as a game.

This necessarily raises the question of how one defines the term “game,” and how literature falls within its conceptual scope. The definition of “game” has long been a subject of debate and discussion for philosophers and cultural theorists, largely due to the breadth of activities to which the label is applied. One particularly useful and applicable definition was derived by Bernard Suits in 1967, who argued the following:

To play a game is to engage in activity directed toward bringing about a specific state of affairs, using only means permitted by specific rules, where the means permitted by the rules are more limited in scope than they would be in the absence of the rules, and where the sole reason for accepting such limitation is to make possible such activity.

This definition seems incredibly abstract at first glance, so a practical example may be useful both to clarify the matter and introduce some terms that will be used in the theory of ludicism.

Suits argues that games are “directed toward bringing about a specific state of affairs,” which I will simply refer to as the “goal” of a game. For example, when playing the chess, the goal is to checkmate your oppoonent’s king.

The “means permitted by the rules” of a game – for example, that each chess piece can only move in a specific way – are often referred to as a game’s “mechanics,” which “comprise all game ‘rules’ and define the options for interaction in and with a game” (Elson et al. 526) — more on these later.

As for Suits’ closing statement, such limitations and rules are necessary for the game to exist: a chess player could technically defeat their opponent by simply sweeping all opposing pieces off the board, but in doing so the player would have completely forgone the game of chess.

There’s an important question here: can games – or more specifically, the people who create games – use these elements to tell stories? The answer is an emphatic yes: goals, mechanics, and rules can each contribute to telling a story or creating meaning.

As an example, consider the board game Train , created by Brenda Romero and often cited as a demonstration of storytelling through mechanics. Players are instructed to load people (represented by little yellow pegs) onto train cars and efficiently move them to their destination. Once a train has been successfully moved, the player flips over a card to find out what the destination was. Each card reveals the location of a WWII concentration camp, such as “Auschwitz” or “Dachau.” In that moment, each element of the game takes on much more significance. The yellow pegs are seen to signify Jewish prisoners (in line with the yellow stars worn during the war), and the players merely followed instructions without stopping to question what they were doing.

Imagine the feeling that that interaction must create – a feeling of guilt, of complicity, of responsibility. Recall the above discussion of House of Leaves, in which I felt all of those same feelings, though perhaps on a smaller scale, because I turned a page and a character died. In both cases, the interaction was key. The interaction is what created those feelings and made the experience meaningful.

I’m getting a little ahead of myself, though, and this is also a lot of information for one post. We’ve established that games have goals and mechanics, and that these can be used to tell stories and create meaning. Next Sunday, I’ll share the second half of the outline of ludicism, in which I define the goals and mechanics of literature and show how these can be used for assessing and interpreting literary works.

I'm 24 and currently pursuing a PhD in English at the University of Toronto. View all posts by Mitchell

Scribblescratch may feature posts containing profanity or dealing with mature or explicit themes. Please use your discretion while reading, and contact me if you have questions or concerns.